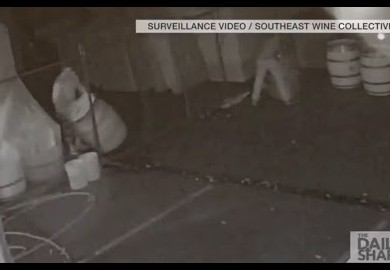 Thieves who stole thousands of dollars worth of wine barrels from a small urban winery in Oregon have been filmed on CCTV footage.

Footage shows the wine barrel thieves rolling their stolen haul into the back of a van in Portland, Oregon, earlier this month.

Staff at the Division Wine Making Company, part of the Southeast Wine Collective, had installed extra security cameras in attempt to catch thieves following repeated burglaries, according to a report by OregonLive.com.

But, it didn’t stop the burglars escaping last week with several new French oak barrels worth up to $1,100 each.

The last batch of barrels stolen were later recovered after Southeast Wine Collective’s co-owner, Thomas Monroe, and his colleagues found an advert for used barrels for sale at depot in Gresham, east of Portland.

Monroe said in a Facebook post that the urban winery has been burgled five times in the past six months.

‘We arrived in Gresham to a dealer of used winery products,’ Monroe said. ‘Within two minutes, I found three of our barrels from a prior robbery (eight days earlier), [and] a few minutes later, stainless items too.’

‘The feeling of shame and helplessness has been terrible and unrelenting,’ he said. ‘We are a small family business that is home to nine other small businesses. They depend on us to provide a functioning and safe place to make their wine.’