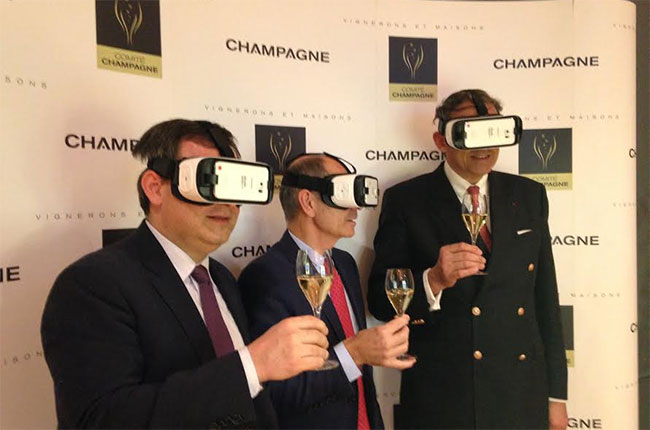 A new Champagne film that allows mobile and tablet users to rotate their view by 360 degrees has been launched to promote the region’s vineyards and cellars following its UNESCO World Heritage status.

The 360 degrees, 3D Champagne film was released at the weekend, with several Champenois – including Bruno Paillard – donning special goggles to get the full immersive experience (see photo below).

Champagne lovers can watch the film on Youtube via their phones or tablets and it is available in English, Chinese, French and Japanese, said the Comité Champagne, which created it.

Moving the device left or right, and up or down, changes the view, while wearing 3D goggles is intended to offer a more immersive experience.

‘With this film we want to celebrate and share our UNESCO world heritage status with the rest of the world,’ said Paillard, who is head of his eponymous Champagne house and also head of communications for the Comité Champagne trade body.

During the seven minute film, the viewer discovers the hillside vineyards at the time of harvest, the Crayères cellars in Reims and the famous avenue de Champagne in Epernay.

The 360 degree 3D format shows the landscape from every possible angle.

Lionel Roques-Boizel, of Champagne Boizel, told Decanter.com, ‘The film is amazing even for the Champenois, because as we go about our tasks, we always view the vineyards and cellars in the same way. The film allows us to expand our own vison in an avant-garde way.’

Nine cameras mounted via gopro on a drone were used to create the 360-degree experience. The film took seven days to shoot, and more than a month to edit. Vincent Perrin, general director of the Comité Champagne, added, ‘We wanted to ensure the viewer really felt like he was visiting the region.’

As well as Youtube, the film can be downloaded as an app on Apple and Android devices.

The best tasted so far this year...