Based in Vienna, Darrel has decades of experience and expert knowledge on wines from Austria and Hungary to Croatia, Serbia, Georgia, Russia and beyond. Joined by returning Regional Chair Caroline Gilby MW, wines entered in the 2022 competition can expect expert, specialist feedback, and readers – trustworthy results.

In our exclusive interview with Darrel, learn more about the countries and wine styles you should discover in 2022, his most valuable lessons in the wine industry, fascinating wine moments from the past decade and more…

Tell us a little about yourself – how did you get into wine?

I came to Europe from the United States in 1987 and settled in Vienna, where I began writing on many topics including culture and travel in Austria. Part of this included visiting wine regions in the country. At the same time, I began going across the border to Hungary and discovering some of its wines, including the one I fell in love with – Tokaji Aszú. Keep in mind that the Iron Curtain was still separating eastern and western Europe at that time, so there was a kind of special atmosphere that made everything seem rather mysterious and exotic.

All of this touched off my interest in wine (which, by the way, seemed like a natural progression without me even realising it; my grandfather had founded soft beverage production businesses in the US back in 1913, and my father eventually headed one of them until his retirement when I was a boy).

In the early 1990s, I started visiting all of Hungary’s wine regions, most of which very few people outside of the country knew about (other than Tokaj and Eger), such as Somló, Villány and Szekszárd. With the wine bug caught, I took some courses in London, and ultimately started to write about the wines of Hungary and Austria for British and American publications.  Then other Eastern European wine countries and regions followed.

What’s the most valuable lesson you’ve learned while working in the wine industry?

There are numerous valuable lessons, as this is a long journey in an ever-changing world. But one lesson that I feel strongly about is:

Always give the smaller wineries and regions – the low-volume producers with funky grape names – their chance to be discovered.

In Central and Eastern Europe and the Caucasus countries, so many producers, whether long-existing or recently established, have developed individual quality wines and styles that are a world – even worlds – away from the pre-1990s insipid, uniform plonk that resulted from Soviet-dominated production policies.

Today, these countries harbour treasures of indigenous grape varieties turned into stunningly crafted wines. Fortunately, some of the wines are able to be exported to fine restaurants and niche retailers abroad. But still, quite a number are not given the chance to be recognised by importers or publications in other markets because of their low-production volumes or assumptions that customers won’t warm to unfamiliar grape variety names.

But, to put it simply, the number of wine lovers, the wine-curious, and wine-adventurous, keep growing. And growing! And the smaller wineries with eclectic variety names, or even eclectic wines, deserve to be shown to this audience. It’s wonderful that some are making their mark abroad. But there are so many more that still need their knock-out secrets to be let out of the bottle!

What interested you to become an expert in the wines from North, Central & Eastern Europe?

I was becoming more and more immersed in what was right at my doorstep – the wines of Austria and Hungary. And the explosion of wines with such individual character along with their amazingly talented winemakers was simply irresistible. Vineyard after vineyard, winery after winery, the revelations were endless.  I realised that this was a part of the world whose wines were virtually unknown outside of it.

As I love an underdog scenario, and love to help enlighten people of what the underdogs can produce, I continued over the borders of these countries – down to Slovenia and Croatia, and up to Czech Republic and Slovakia. And I kept meeting winemakers full of vitality and determination to break from the old mass production formulas of the Iron Curtain years and create wines that showed true regional beauty and definition. And their wines were indeed showing this!

So, with full throttle fascination, I continued further into neighbouring countries: Serbia, Macedonia (now North Macedonia), Romania, Bulgaria, Moldova, Russia, Georgia, Armenia, Azerbaijan and on and on. Such a trove of vinous pleasures.

What’s so ironic is that wine has been produced throughout this entire region for literally thousands of years! And yet, look at books and guides from many wine education programmes – the number of pages about this region are rather limited. The word is getting out – but many more words are needed!

Are there any particular grape varieties or wine styles coming from these countries that you urge readers to try?

There is a plethora of varieties that should be tried! Croatia is loaded with indigenous grapes, and Pošip and Grk are two exciting white varieties. These are found mainly on the island of Korčula, off the Dalmatian coast, though Pošip is being planted in other areas as well. The Mediterranean fruit & herb character of Pošip, and the textured, saline beauty of Grk make these dry wines gorgeous by themselves or when paired with seafood.

For dry reds, Croatia has Plavac Mali, with its full red & dark fruit flavours and generous tannins. And throughout the Balkan countries is the mouthfillingly succulent Vranec (also spelled Vranac); North Macedonia and Bosnia & Herzegovina produce some excellent versions matured in steel or oak.

Other distinctive reds that need to be explored, in my book, are Fetească Neagră from Romania, Kadarka from Hungary, Prokupac from Serbia and, yes, one tongue-twister that I discovered many years ago, Krasnostop Zolotovsky from Russia.

In the Caucasus, there is Armenia’s beautiful Areni Noir; and Georgia, whose traditional qvevri-aged wines have become an international sensation, has the deep, chewy-rich red Saperavi. In fact, Georgia also boasts incredible white varieties that make stunning qvevri amber wines, such as Rkatsiteli, Kisi, Khikhvi and variations of Mtsvane.

Also not to be missed is Hungary’s white Furmint grape variety; although it is traditionally used as a prime component of sweet, luscious Tokaji Aszú, it has gained impressive momentum also as a single varietal dry wine.

What advice do you have for wine professionals looking to get into wine judging?

Which wine-producing areas do you think should be given more attention in 2022?

Eastern Europe as a whole… and then specifically top regions… It’s impossible to mention them all in one go!

In Slovenia, regions in the west, like Vipava Valley, have garnered major attention for superb wines. And now, the Štajerska region in the northeast is one to watch, especially as it is really a continuation of Austria’s Steiermark wine region. Before World War I, it was all one region anyway. Even with today’s border, what do you find in Štajerska? Laces of terraced vines producing lovely Sauvignon Blanc, Šipon (Furmint), Traminec (Traminer) and more. Just like in Steiermark.

In Croatia, there can never be enough attention on all of the regions, but three that simply must be spotlighted are Dalmatia with its red Plavac Mali (Pelješac peninsula) and Babić, and white Pošip and Grk; Istria, home to vivacious red Teran and the seductive white Malvasija Istarska; and the continental regions of Slavonia and Danube, where Croatia’s most widely planted grape, the white Graševina (Welschriesling), runs the style gamut from dry sparkling and still wines to sweet botrytised versions.

Other exciting top regions that should be given their due are Povardarie (Vardar River Valley) in North Macedonia, and Bosnia & Herzegovina, both making excellent versions of Vranec. And there are Serbia’s regions of Fruška Gora (part of Srem), and Šumadija, which host several innovative, dynamic producers.

In Romania, indigenous grape varieties are abound, and the Drăgăşani region in the southern part of the country has some excellent versions of the white Crâmpoşie Selecţionată and the red Negru De Drăgăşani. The Czech Republic, which to me stands out for being a hotbed of innovative natural – or minimal intervention – wine production, boasts these as well as developed minerally traditional wines, especially around Mikulov in South Moravia. 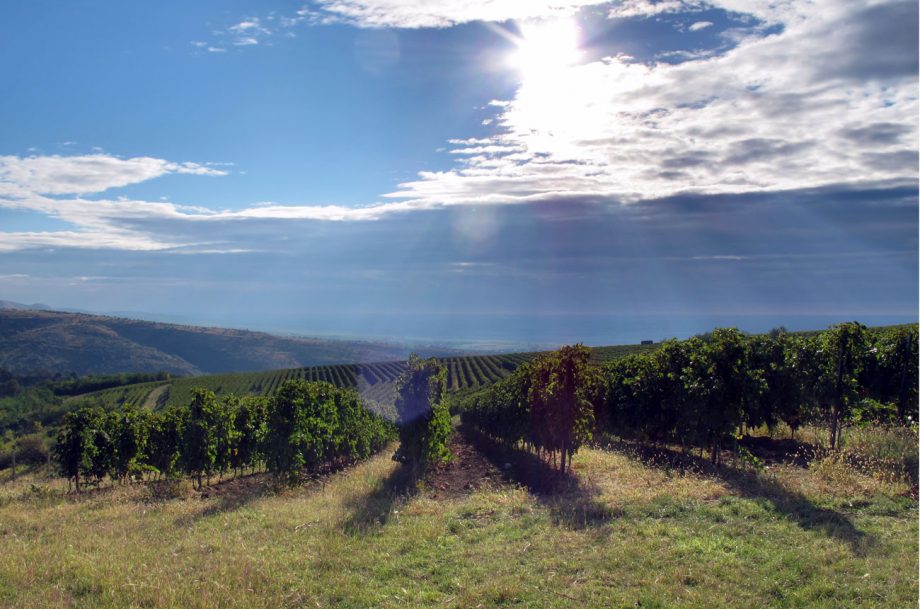 This is just a glimpse at what is out there. Many wines from Bulgaria and Moldova are outstanding. And keep an eye on Turkey, Albania and the Krasnodar region of Russia.

What are your most memorable wine moments from the last ten years?

There have been so many, that I honestly can pick only a few. One of the most beautiful experiences was participating in the harvest of Plavac Mali grapes at the Plenković ‘Zlatan Otok’ winery on the Croatian island of Hvar. The steep hillside vineyards go right down to the sparkling blue Adriatic sea, and the view, while picking the ripe, dark fruit from the bush vines while a local donkey was moseying about, was tremendous.

Among several visits to Russian wineries and vineyards in the Krasnodar region, one of them comprised of exploring sleek, newly built 21st century estates together with those dating back to Imperial Russia (Abrau Durso, the sparkling producer, and Myskhako, whose Soviet-era buildings still had a large statue of Lenin near its entry, and a preserved room where Brezhnev attended a conference). It was like a riveting time travel.

In Georgia, being able to visit one of the country’s few remaining qvevri producers and see what this art form involves was particularly thrilling. And “next door”, in Armenia, it was equally fascinating to explore the dramatically beautiful vineyards of the Vayots Dzor region – some soaring up to well over 1,000 meters – and to see the ruins of the world’s earliest known winery, dating back to more than 6,000 years, in a cave above the village of Areni.

It was particularly rewarding to conduct several masterclasses on wines from Tokaj, Georgia, Armenia and North Macedonia to wine trade professionals in South Korea. Many of them were tasting wines from these lands for the very first time. Their enthusiastic reactions said it all.

Finally, what are you looking forward to most about being the Regional Chair for North, Central & Eastern Europe at this year’s competition?

Judging at DWWA since 2007 (except for the special pandemic years), it has been wonderful to be a part of a specialist team that looks closely at the wines from these regions and provides the best possible, carefully considered feedback for each one.

And now, I am looking forward to continuing this, as well as tasting and discussing even more intricately with the Co-Chairs the merits of the wines that could potentially take them to Platinum or Best in Show.

Best Tokaji wines for Food – Thinking Outside the Box